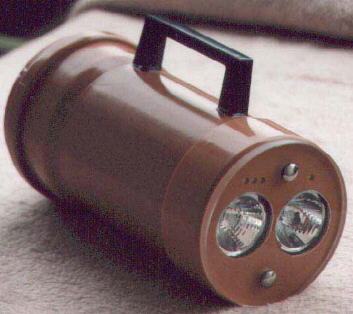 My light is made from a very rugged 125mm waste water tube (DN125) with an inner and an outer cap. The front glas is made of 8mm persplex. There are two halogen reflector bulbs: 75W (flood) and 20W (spot) fed by a lead acid gel accumulator with 6.5Ah. Switching is done by reed contacts. The handle is from a measuring instrument.

I cut two 50mm holes out of the front cap. A persplex disc with 128mm diameter was glued onto the cap with silicon. Two 80mm lock bolts of brass connect the two parts and an aluminium metal sheet. This part holds the two bulb holders. The bolts also transmit some heat to the outside. The complete cap assembly is glued to the main tube. 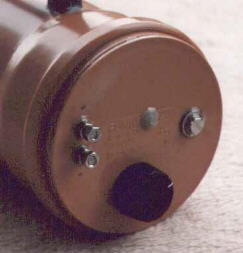 There are two bare VA-bolts at the back inner cap for charging the accumulator. A diode prohibits discharging in the water. A third bolt detects if the light is in the water, so that the light shine only under water. A 6mm plastic axle got a threading and is mounted to the cap. A poti button with glued in magnet sticks onto that axle. With that two reed contacts in the inner space are switched.

The reed contacts are connected with two power relais which control the bulbs. The cap is only put in with the appropriate sealing ring and silicon grease. There is no other sealing. To get mechanical fixing some points are glued with epoxy glue. There is also a 1mm hole in the cap, which is closed with glue afterwards. Without this hole it wouldn't be possible to close the light.

The handle is mounted with two bolts through the tube and sealed with epoxy glue. The accumulator is fixed with mounting foam, which can be a mess if you have to change the accu.

The light has yet survived two dives to 40m. The costs for all parts have been about €50. The possibility to choos spot or flood is very nice, but the light is quite big.

A small ring formed at the front persplex glass because of the heat produced by the 75W bulb which is only 1cm away. So I only use the flood not longer than 2min continuosly. A real glass would have been better.

During the first dive to 25m the back cap vaulted. One of the reed contacts broke, because is was rigid glued to the cap. The light couldn't be switched off. Only some hard beats above the water showed effect !!! I reinforced the cap with 8mm perplex and mounted the reed contacts with 5mm distance. Additionally there is now a safety circuit which inhibts function out of the water. The front cap just worked fine as did the tube.

Another problem is some sort of over pressure in the inner side of the light (even when cold). Maybe the foam ?

Comments and questions (by Reinhard Kopka):

I smoothed the fixed axle with fine sand paper and greased it with silicon grease. The button glides onto the axle. but it holds enough not to fall of. It can be taken away as additional security.

Sure. But it has to be really wet.

back to Homepage | back to other people's projects