I had the same reason to build an UW-torch as each other diver. To make it short the light was unfortunately not cheap.

At first I had to decide which material to use. I chose aluminium because most nice, commercial, tekkie lights use it. That was only possible, because I can do turning and have a lathe I can use. I also made my thoughts about the electronics which should support all possible features. Of course this thing should look good. 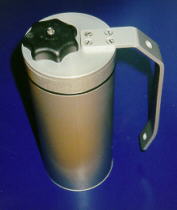 My torch ist made from anodized aluminium. It uses a 12V/3,4Ah lead acid battery and a 35W bulb. More power is possible. It has a 3step dimmer and burns about 65min at full power. The dimmer steps can be set individually. The charger was very cheap. The current can be adjusted. At 1.3A it takes 4h for a full charge. I will integrate a small voltmeter in the remaining space.

It is possible to use a different battery. A 12V/5Ah NiCd battery will fit. It would have had benefits but was too expensive for the first trial.
The switch is a magnetic type from DEV-Pein. The light also has a deep discharge protection which will blink if the battery runs low. There is also a (switch-on) current limiter and a leakage warner. The electronic is from Reinhard's homepage. All features were combinded (dimmer, deep discharge, leakage detector, current limiter). I use a mdeium reflector with 30° - but now I think a 10° might have been better. Never mind the reflector can be changed. It is locked with a plastic ring inside the tube.


The battery is fixed with two plastic rings. One fits pressde inside the cover. The other one centers the battery. The rings are glued to the battery with hot-melt-adhesive. The bulb socket is pressed into an aluminium part screwed to the battery and ring fitting exactly inside the tube. This way the bulb is centered and protected by the four bolts. The torch must be opened for charging. A watertight charging plug (DEV-Pein) could be added later.

<>I needed a friend to turn the large thread because my lathe was too small. He needed to use a commercial lathe and so it cost me €36. The thread has 6 or 7 convolutions but 4 to 5 would be enough. The tube could only be clamped for 5mm. The thin wall thickness and the large forces made the problems. I could do the rest on my own or the cost for the lamp would have been too high.
The step for the glass which is glued with silicone glue is adjusted for 0,2mm tolerance. The length of the finished tube is 225mm. The bottom cover has the same diameter as the tube and a length of 41mm. The removed inner part is 94mm in diameter at a depth of 34mm so 7mm of thickness remain. The reed contacts could be switched up to 12mm thickness. 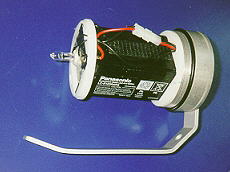 I had problems finding the right reed contacts. In the end I used plastic sealed contacts (Conrad electronics) which are cheap and easy to glue. The magnetic button uses a small screw as transportation lock thus needing a screw driver. As alternative I made a custom screw from the grip of a screw driver. The handle is cut to length, drilled, the edges filed and then bent around a vise. The parts are anodized (3 days and €7).

The torch is bigger than a commercial one, but that leaves space for spare parts in the inside (spare bulb, O-Ring, Silicone paste...)

Good luck for your projects !

back to homepage | back to other peoples projects